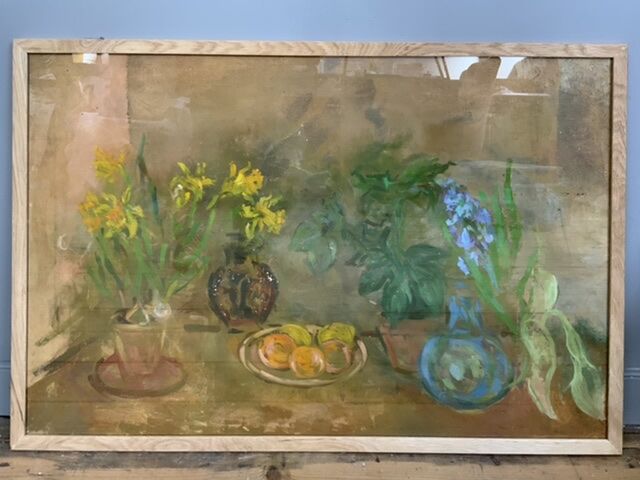 A large oil on canvas by Stella Steyn, typically a still life of daffodils, hyacinths and fruits, a stunning composition by this Irish artist whose work is enjoying recognition again after a long absence away from the art scene until her death in 1987.
In good condition, the loose canvas framed and glazed in a simple light oak frame.

Stella Steyn 1907 – 1987
Born in Dublin to émigré parents who had moved to Limerick in the 1870s from Eastern Europe, she was educated at Alexandra’s College and later at the Dublin Metropolitan School of Art. Like other contemporary artists, Evie Hone and Mainie Jellett, Steyn travelled to Paris in the 1926 to study, accompanied by her mother and fellow artist Hilda Roberts. While there she enrolled in the Académie Scandinave, an art school run by Swedish, Norwegian and Danish artists housed in the former studio of Jean Antoine Watteau and later at La Grande Chaumiére, another school set up by a Swiss artist Martha Settler. Similar to the Académie Colarossi, it was established as an alternative to the strict, and quite conservative education practices of the official École-des-Beaux-Arts.
During her time in Paris, she met other Irish creatives who had emigrated to the French capital, feeling unable to pursue their respective artistic careers within the strict confines of Catholic Ireland. Most notably Samuel Beckett and James Joyce, the latter of which proved to be a fruitful encounter leading to her providing the illustrations for an early publication of ‘Anna Livia Plurabelle’ – what would become Finnegan’s Wake – in Eugene Jolas’ magazine transition.
On returning to Ireland she continued to develop her artistic career and succeeded in having nineteen of her paintings included in the RHA annual exhibition between 1927 and 1930. The following year she travelled to Germany and began studying at the Bauhaus, the only known Irish artist to have done so. While there she had the priviledge of being taught by major European modernists such as Wassily Kandinsky, Paul Klee and Joseph Albers. In 1933, she met David Ross, a professor of French at the University of London, they later married and relocated to England where she spent the remainder of her life. She had a number of important exhibitions in London during the 1950s, including a solo show in 1951 in the Leicester Gallery.
In Steyn’s work, it is difficult to ignore the importance that these years studying in Europe had on her practice. She works with a vibrant colour palette rendered with thick expressive brush strokes. Her compositions, often still life studies, have a distinct sense of her absorbing a French artistic influence, most notably Cezanne in her treatment of line and form, often slightly abstracted shapes with bold outlines. 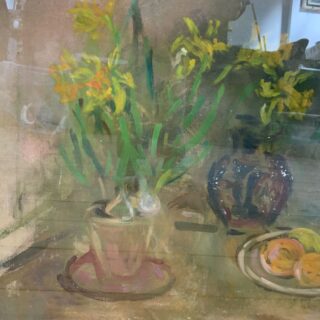 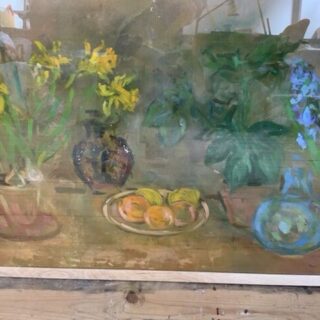 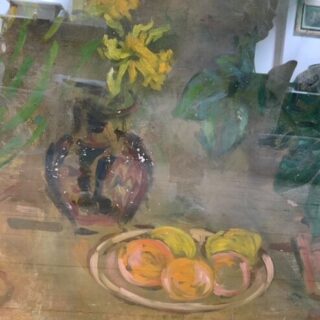 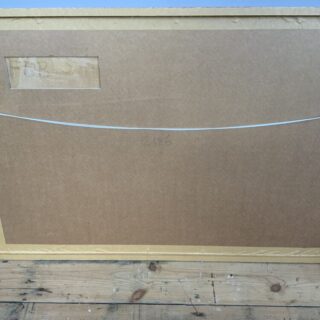